Tractor Link Arms Will Not Lower

Tractor Link Arms Will Not Lower

Your link arms will not lower.  It’s a frustrating problem.

We commonly associate hydraulic problems with poor pump performance and reduced or slow lift capacity.  However, we get quite a number of people reporting that their link arms won’t lower.

We’ve had an email from the owner of a Massey Ferguson 35 who has this problem, so we’re going to take a look at what could be the problem and what needs to be done to get the system working again.

The rate of drop of the arms should be set so that the lower links will just fall under their own weight when lifted by hand.  This is altered by adjusting the cap screws in the ends of the lift arms shaft.

If the screws are tightened too much, not only will it prevent the arms from lowering but it can also cause erratic action of the hydraulic system.

However, if a heavy implement is attached to the linkage and the arms will still not drop then it is likely to be related to the pump control valve.  We first need to uderstand how the position of the control valve raises and lowers the arms.

The Pump And Control Valve

The lower part of the pump is immersed in hydraulic fluid.  When the control valve is open it allows fluid to be sucked up into the pump and then on into the discharge passage (to pressurise the lift cylinder and lift the linkage arms). 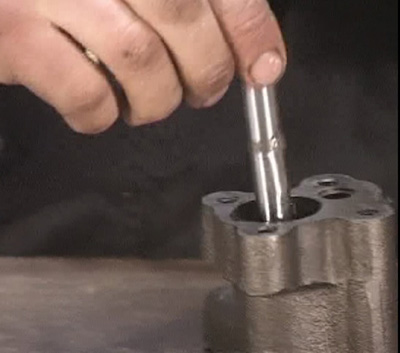 The contol valve slides to regulate the supply of fluid to and from the lift cylinder, the degree of which depends upon the relative settings of the manual control levers (and also by any control exerted automatically by the hydrauilc control mechanism).

The sliding control valve is essentially seperated into two compartments, one facilitating fluid inlet to the pump and the other compartment allowing an outlet from the high pressure chamber.

NOTE, the control valve is always held towards the drop position by a compression spring. 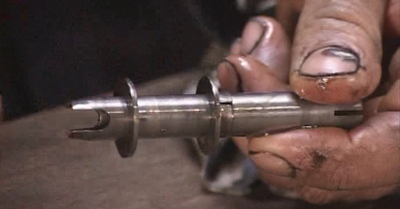 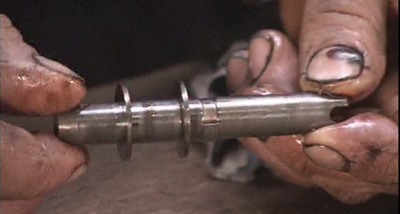 What Can Go Wrong?

To prevent the control valve from sticking there is an oscillating mechanism.  The oscillator is driven from one of the pump eccentrics as the drive shaft rotates.  It is not uncommon for the square end of the oscillator push rod to be rounded off.  This would cause the oscillator to be inoperative and so the rod would need to be replaced. 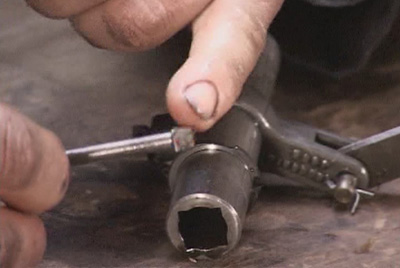 The exteme accuracy of fit between the control valve and its sealing washers means that any small particle of dirt could cause the valve to jam.  Extreme care should therefore be taken with cleanliness of the system. 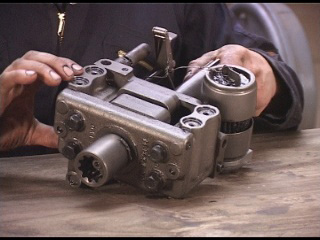 The hydraulic pump with strainer filter 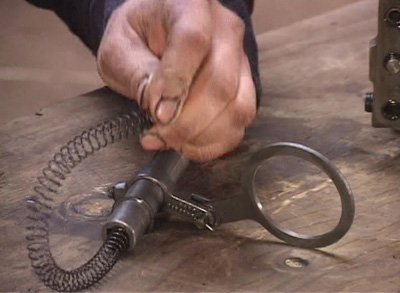 The oscillator spring, although not a very strong spring, is quite long. It is possible to hold the spring pressure by hand whilst removing the retaining circlip.

Also, it is possible that a failure/problem/jamming of the internal control linkages would prevent the control valve to move rearwords into the ‘drop’ position.

Water Or Condesation In System

We’ve had a few people contact us to say that they have had probelms with milky oil (condensation built up over time and mixed with the water) and this, they suspect, has been the cause of their lift arms sticking up.  One owner reported the arms sticking whilst the temperature was below freezing.  Another owner reported the lift cylinder and its piston rusted together after just 4 months of not using the tractor – this owner had the milky oil and had to remove the top cover to free the piston.

It is possible to drain some of the hydraulic fluid and remove the right hand transmission casing inspection cover to take a look inside the tractor.  Do not put your hands through the inspection hole if the engine is running.  It should be possible to see if the levers are moving the control valve and to see if the spring is returning the control valve to the rearwards (drop) position.

Removing the stand pipe would also isolate the pump, control valve and control linkage mechanism as the problem.  i.e. if the stand pipe is removed then the problem is either associated with the lift cylinder itself or the lift arms binding.  Beware, even with the engine stopped,  the hydraulic fluid in the stand pipe could be pressurised.

It is possible that the lift cylinder seizes in the ‘up’ position if the tractor has not been run for some time, rusting in place due to excess moisture in the oil and the transmission casing.  An example of this occuring is given in the comments section of this page.

Obviously the necessary repair depends on what you suspect the problem to be.

Earlier in the article we looked at what to do to set the lift arms to prevent them from binding.

Repair of the control valve and its oscillating mechanism will require removal of the hydraulic top cover to access and strip the pump components.  This is an involved process and you may find the MF35 Hydraulics Troubleshooting And Repair DVD helpful to guide you through this process. This article was based around the Massey Ferguson 35 tractor.  The information will also be useful for many other models that have a similar control valve and hydraulic system.