The production of Ferguson TE20 and TO20 tractors spanned a decade, from 1946 to 1956.  In tota 517,651 TE20’s were manufactured and 140,000 TO20’s.  These tractor were certainly the most successful tractor range ever built and revolutionised farming in the post war years.  In fact the TE20 was the first tractor to be used on many farms, which until that point had relied on heavy horses to do the work. 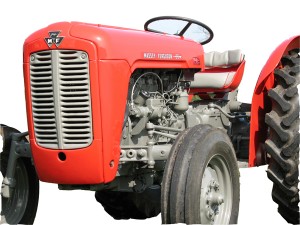 Which tractors does this article cover?

The title of this article ‘Massey Ferguson 35’ would, in actual fact, only refer to the production of tractors from 1957 to 1964, but this range of tractors included the American built TO35 (Tractor Overseas), English built FE35 (Tractor England) and the French built MF835 and 35-8.  Here we will look at the English built tractors, but just to note that production first started in America of the TO35 in 1954.  Production in England of the FE35 didn’t start until 1956.  Take a look at the serial numbers and year of production of the FE35.

If you have one of these tractors, then you may find our easy to follow maintenance DVD’s useful…

The Ferguson 35’s were an updating of the TE20 range with uprated engines and power, dual clutch option to provide live drive pto, dual range gear box to increase forward speeds from 4 to 6, ground speed pto, increased hydraulic lift capacity and the addition of draft and postion control from a dual lever hydraulic control system (link to MF35 Hydraulics DVD).  The De Luxe version was fitted with the dual clutch, live P.T.O., tractormeter and cushion seat.

The first of the Ferguson 35 tractors were painted with Grey tin work and copper coloured castings and were called the Ferguson FE35.  Power was provided from either the Standard Motor Company petrol, VO or 23C 4 cylinder diesel engine.  Many people ask why the engine is called the ’23C’ , well the Standard 23C engine is 2259 cc (in other words, nearly 23 hundred) [or ‘C’].

Massey Harris and Ferguson merged on the 12th August 1953 and were known as Massey Harris Ferguson.  The company name was changed to Massey-Ferguson (note the hyphen) following an announcement on 19th November 1957, but then the hyphen was dropped early in 1958.

The colour of the tractor changed from grey and copper to the more familiar red tin work and grey castings.

The change to the colour of the tractor was late in 1957 when the Massey-Ferguson name was first announced.  The best information we have is that the first red and grey tractor was prodcued on the 5th December 1957, but if you know of any different information please let us know. 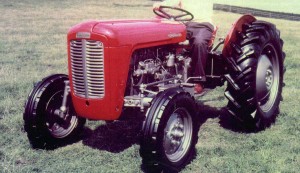 The first of these red and grey tractos retained the Ferguson badge on the front of the bonnet and the Ferguson 35 decals along the side of the bonnet (in the form of a metal badge as opposed to a sticker).  However, the serial number plates (on the dashboard) continued to have the tractor model number stamped as FE35 and this model denotion continued right the way through the manufacture of all the Massey Ferguson 35’s.  The photo above is from a promotional brochure of the tractor from 1957, and below – a close up of those badges.

Close-up of the Ferguson badges

It is quite clear from these photos that the first red and grey tractors had Ferguson on the front and Ferguson 35 on the side of the bonnet and we also know that they have FE35 stamped on the identification plate.  It therefore follows that although by this time the Massey-Ferguson company was founded and the colour of the tractor change to red and grey, the tractor was still branded as a Ferguson.

One reader of this website has suggested that the Ferguson brand/badge remained until serial number 107892 (which was around June 1958) after which the  triple triangle of Massey Ferguson was introduced.   However, there are other tractor documented such as David’s red and grey 35 (August 1958 SDM112958) and Per’s FE35 (1959 SDM161488) – both with Ferguson badges on the front of the bonnet.  David’s tractor is in Australia and Per’s in Canada and it is possible that these tractors were assembled after shipping using component parts in their respective countries, so there could be some differences here in comparrison to the English built tractors for the home market.

Also, there is the following information to consider…

Wording change on decals from “Ferguson” to Massey-Ferguson” authorized by Engineering Dept. on 2/9/60.

We can just see the push button bonnet catch on the photo above, and this continued to be used until 1959 serial number 141140 after which a swivel catch was fitted on top of the bonnet lid itself.  The six stud half shaft housing that was used on the grey gold tractors continued to be used for the production of the first 2972 red and grey machines before been replaced with the 12 stud version.

There were many small changes and options to the tractors over the period of manufacture.  The first of the Perkins engine tractors retained the old-style air inlet under the bonnet, but this changed to the raised air cleaner intake that went through the bonnet and must be removed before the bonnet can be lifted.  1962 gave the option of PAVT (power assisted variable track) wheels to speed up alteration of the rear wheel track and the advent of the swinging drawbar.

Mudguards changed from the shell design to the extension mudguards that connected to revised footplates – this change was made to ensure health and safety compliance.

The most notable change was probably the adoption of the Perkins A3.152 engine from serial number 165596 in 1959.  This engine gave 37 horsepower (3 more than the 23C) and was well liked by farmers.  The 23C engine was renowned for poor starting performance and the Perkins engine brought new life into the 35.  If you are rebuilding one of these engines we have uploaded data specifications and torques for the Perkins and the Standard engine.  If you are rebuilding the Standard engine then you may find some useful information in the Engine Rebuild DVD.

The transmission remained the same until there was a multi-power option on the 35X.  This doubled up the available gears and also gave the advantage of change on the move gear shift.

The last engine change came with the introduction of the Massey Ferguson 35X, which used an uprated A3.152X engine.  This was another well liked engine and the 35X is the more desirable version to many collectors.  The differential lock became available in 1962 on the 35 and was also an option on the 35X (most of the 35X’s were fitted with the diff lock).

The date of manufacture of the castings is given in a code which consists of a letter, followed by a number and then finally another letter.

The first letter indicates the month of manufacture ‘A’ for January, running through to ‘L’ for December.

The number refers to the day of the month.

To give an example, using the information from the table below we can see that a casting stamped J 24 L would have been manufactured on October 24th 1963.

This information has been collated from various sources, including many readers of the Vintage Tractor Engineer website. We would like to thank everyone who has contributed.

There have been so many changes to the Massey Ferguson 35 over the years and many tractors have had replacement castings, engines and other components, so it is often difficult to ascertain what is (or is not) original. For that reason it is always good to hear from people who have owned a ’35 from new and can therefore be certain about its originality. If you have any information about these tractors that you feel is worth adding to this page or if you have information which differs from that above then please let us know in the comments section below.