MF35 Diesel In Oil and Over Running Engine

Home/Engines, MF35 FE35 TO35/MF35 Diesel In Oil and Over Running Engine
Previous Next

MF35 Diesel In Oil and Over Running Engine

My MF35 has been a joy to use for many years but is has now been parked up for some time.  I’m missing it and would like to have it back to its old self.

Back then I was servicing it and noted that the sump oil level was actually rising and getting a bit thinner.  When I drained the oil it was obvious that it had been slowly diluted over time with diesel.

I had no idea then & still don’t know where the diesel is coming from.  All through this time the tractor was performing nicely as usual with a clear exhaust.  I had the injector pump serviced, at great expense, and reinstalled it with new gaskets/seals etc..

At that point I was hoping I had fixed it but after a few months I noticed the same problem with the oil.  It got to a point one day when I started the tractor, it went into a catastrophic overrun and I couldn’t stop it.  It just kept accelerating.

There was so much smoke I couldn’t see more than 5 feet an any direction.  Just when I thought the engine was going to explode it shut itself down and the smoke cleared.

Needless to say, I haven’t been game to start it again since then.

I have wondered if it was possible that the diesel is going down past the piston rings??
Any ideas?

You are experiencing two symptoms. Diesel fuel entering the lubricating oil in the sump AND engine over-run.

It could be two independent faults that are causing the two lots of symptoms independently – so we should keep that possibility in mind.  However, I am thinking that it may be one fault that is causing both of the symptoms.

Over-running is caused by excess fuel entering the top of the cylinder (from one source or another).

One feature of the MF35 that makes this phenomenom possible is that the fuel tank is above the engine. And thus, fuel can leak down into the engine via pressure (gravity) – this can happen slowly over time (even when the engine isn’t running).

Fuel can leak out of the shaft seal on the injector pump, and that would add to the diesel in the lubricating oil. However, a leaking shaft seal would not make the engine run out of control. Added to that, you’ve just had the injection pump serviced.

It is possible for the injector pump to stick open on full fuel – which would make the engine over-run, but that wouldn’t contribute to the diesel in the lubricant level.

A leaking lift pump could contribute to the rise in lubricant level, but it wouldn’t be possible for the fuel to get into the top of the cylinder from this fault (and cause the over running).

It is, however, possible to for the fuel to fill up the sump oil in an engine to a level which is so high that the pistons can pick up the fluid and drag it into the cylinder, where it can combust. This phenomenon tends to only happen with engines that have a dipstick that is up high above the engine. i.e. There is no-where for the oil/diesel mix to escape from. Engines such as the diesel Massey Ferguson 35 have a much lower dipstick, so the fluid tends to leak out of the top of the dipstick before it can cause a problem. That said, it may depend on how well the dipstick seals.

Faults that can cause both symptoms

So, if we are looking for a reason that would both increase the lubricant level over time AND cause over-fueling and engine over-run, then I would suggest this will either be a leaking heater plug (thermostart) with fuel building up in the air intake, or a leaking injector – giving rise to a build up of fuel directly into the cylinder. Both of these faults can cause fuel to leak into the top of the cylinder, and then down into the sump.

So I would probably start by checking the easiest thing first. Firstly make sure there is some fuel in the fuel tank to facilitate the fault occurring. Remove the heater plug and see if there are any signs of leaking – the manifold may be full of fuel if it is leaking badly.

Were your injectors serviced?

It is possible for the injectors to leak even when not in use.  The needle seat may not seating correctly either because of wear of because a foreign object is preventing it from sealing.

If you take an injector out you might get a clue if one of them is wet or if you turn the engine over with all the injectors removed then fuel might be pushed up out of the cyinder of the faulty injector. Take care of high pressure diesel fuel from the injector pipes. Alternatively you can have all the injectors serviced. If one of the injectors has become faulty, then as they are all the same age, it would make sense to have them all serviced.

Hope this has given you some ideas.

The owner of the tractor has started to make some initial investigations.  Here’s what he had to say:-

Yesterday we replaced the heater and swapped in a full set of injectors from another M35 (acquired recently as a future ‘fixer-upper’.
The heater we removed was very wet but when we reattached it externally there was no sign of leakage.  (See attached photos) 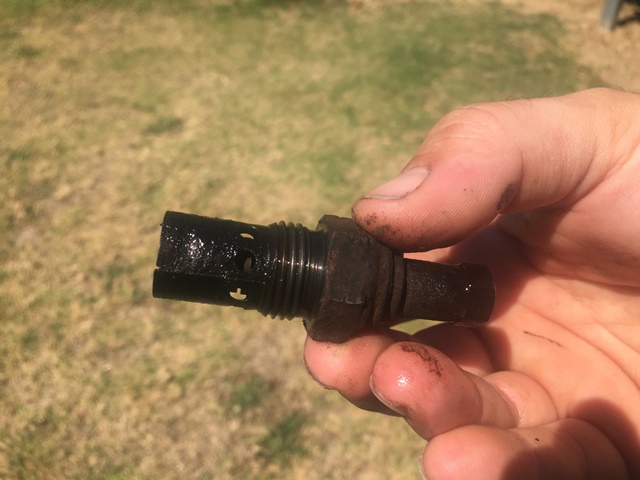 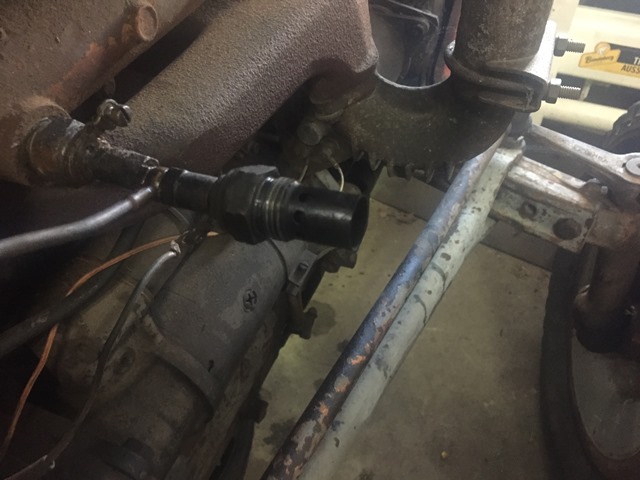 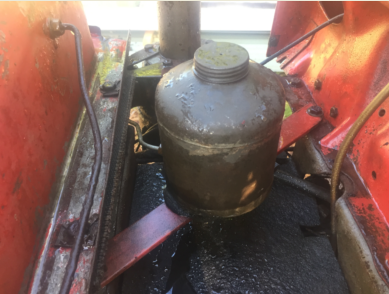 The injectors were replaced because, at idle, one appeared to be popping out a bit of smoke from the exhaust.
Once removed the ends of two of them where a bit wet. One more so than the other. I don’t think it was enough to account for the diesel leak though.

The lift pump hasn’t been replaced because we don’t have a new one on hand and haven’t swapped from another tractor because we don’t have any new gaskets in case we damage the existing ones. If we can’t get gaskets this week we may make some temporary ones to keep us going.
Also note that the current lift pump is also relatively new, but that doesn’t guarantee that it isn’t faulty.

To finish off this update, the sump was drained and fresh oil added and the tractor was used for most of today without any over run happening.
Before draining, the fluid level was right at the top of the dipstick so there was a lot of diesel in there.

While we are going through all of this we would also like to perform a compression test but don’t have the gear on hand to do this. I’ll see how I go with that this week.

I’ll be checking the oil level every day now to see if there is any noticeable change while the tractor is not in use.
At the end of today it appears not to have changed since the new oil was added.