The Allis Chalmers ED40 was the last model to be produced in England at the Essendine Factory in Rutland. Production started in 1960 and ended in 1968. Approximately 4000 units were built, of which 450 were exported to the USA around 1964. Although production ended in 1968, new tractors could still be purchased for several years after this, as sales were slow.

We have an Engine Rebuild DVD that is relevant to this tractor. 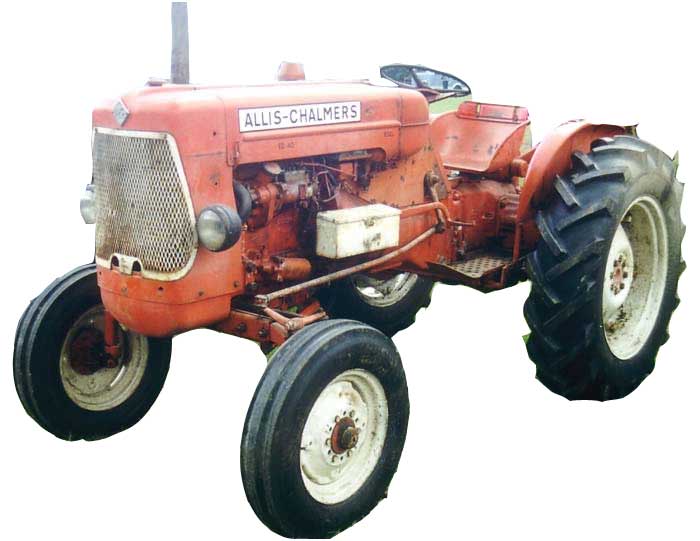 The most popular Allis Chalmers tractor in the UK market was the Model B, with the distinctive narrow tube construction which linked the engine to the transmission. Production of the Model B started in 1937 and ran for 17 years until 1954 when it was restyled and badged the D270. The D270 was not a new model, the only difference to the Model B been the tinwork and an uprated engine. The final variation came when the D270 became the D272, although any alterations were only superficial.

The ED40 was of a more heavy construction than the D272 and was fitted with a Standard Riccardo 2.3 engine, 8 speed gearbox, live hydraulics and the option of live PTO. Allis successfully trialled a Perkins engine for use in the tractor, but then Massey Ferguson purchased Perkins and did not wish to supply Allis with engines. The Standard 23C engine was a sweet running tried and tested, economical 4 cylinder unit which had previously been fitted to the Ferguson FE35 and MF35. The poot starting performance experianced by the Ferguson operators was again becoming an issue for the Allis owners. This problem was addressed with the addition of direct heater plugs into the engine block.

If your ED40 engine requires maintenance/rebuilding then see the Massey Ferguson 35 Engine Rebuild DVD, as the majority of the information in this DVD is also relevant to the 23C engine in the ED40. Other useful information is available from the UK Allis Chalmers Owners Club. This Allis club has tractors for sale and wanted, as well as parts for sale and wanted. They may be able to help directly with sourcing parts and the club also does a quarterly newsletter.

The transmission gave a top speed of 17mph and there was a creep gear available (0.4mph). Allis made great claims about the Depthomatic hydraulic system, but many farmers were unimpressed by the operative ability of the system and dissapointed by the capabilities of the 1.25 ton tractor. The Depthomatic system was introduced in 1963 and in the same year the engine power was uprated from 37 to 41 BHP; however production numbers of the ED40 were much lower than the Model B variants. It could be said that Allis Chalmers didn’t pursue the UK tractor market with the same vigour and effort as was given to the US. Sales of the ED40 were slow and production ceased in 1968, when Allis sold out the UK business to Bamfords of Uttoxeter.

Although the ED40 was not the most successful of tractors in the Allis Chalmers range, they are now becoming a very collectable tractor. Values of the ED40 tend to be higher that the older Model B’s (as fewer were produced), even though they are a more recent machine.

VintageTractorEngineer has not worked on an ED40, but the distinctive colour scheme of the Allis is always a draw whenever we see one at a Rally or show. It seems strange that the ED40 didn’t enjoy the success of the B’s, as it is a much more capable tractor. If, however, you consider the long time scale of the production of the B’s and also that competition from other manufacturers/models was at this time becoming very fierce, then the reasons for the low production numbers become apparent.

What people have said so far…..
1
David Naeyaert says:

August 31st, 2008 at 3:44 pm
I purchased an ED-40 allis last September. This August I rebuilt the Standard-Ricardo 23C engine,installed rebuilt injectors, and replaced the LPTO clutch. I’ll get back later.

October 26th, 2008 at 7:29 pm
Hi! My dad purchased an ED-40 a couple years back and quickly became discouraged with finding parts. I was wondering if you know of a site, or how to attain parts for the ED-40.

December 26th, 2008 at 8:01 am
hello,
I´ve got an Allis Chalmers ED 40 Bj. 1963. My problem is to announce the tractor. For this I need original documents for an Allis Chalmers ED 40.
My question is could you send me the copy of the original documents from your tractor.
Then I were able decrease the tractor and announce it here in Germany.
Thank you in advance.

We don’t own an ED40, but maybe someone else can help you.

Suzannah,
There are some resources on the Unofficial Allis site.