The numbers are relevant to Ford tractors manufactured between 1965 and 1975, located on the right hand side of the tractor on the flywheel housing, just rearwards of the starter motor. 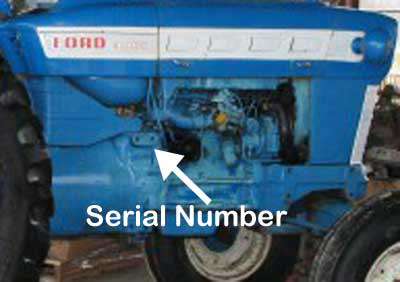 This example above would be…

Use the data below to identify your tractor.

Date of the month from 1 through to 31

Letter at beginning of serial number

B – Built in Basildon, England

The production number of the tractor.

Maybe you need a bit more Ford expertise. Try the Ford and Fordson Association. Sorry I cannot be of more help.

Thanks for adding your tractor’s serial number, giving some additional information about serial numbers and informing us about the continuation of the building of these tractors into 1975.
Presumably you know that your serial number (B948007) is one of the higher numbers and thus it is a 1975 machine. Do you know if there is any distinction between 1965 and 1975 in the ‘5′ of 5A09B ?

April 10th, 2008 at 10:56 pm
I have a Ford Tractor with motor problems the serial number is C5NN605 with D5k14 under that. The transmission number is C5NN7006AA. Can you tell me year and model of this tractor so I can order parts and a Manual. Thank you for your help.

I believe that LCG stands for Low Centre of
Gravity.
The LCG models should have smaller rear wheels and shorter drop arms on the front axle than the standard models. I think some of these
tractors were numbered 4110 and most of them were used for amenities work for city councils or golf courses where mowing work was to be done on steep bank sides, so many of the tractors were on turf tyres.

My Ford 2000 has three sets of numbers. They are as follows:

You made need the middle part to tell the year (9K20B)

June 19th, 2008 at 8:39 pm
I have a Air Force Tow Tractor with the military production date of June 1975 that is a model 2000 I believe. I want to sell this running driving unit and will be usung your site to further identify the unit. Thanks for being here as what I know about tractors is not much.

Can anyone tell me the month/year of manufacture?

Any information will be appreciated.

The only code in there which may correspond is the first one that may be the Production Code ?

Can anyone help, please ?

This is for Dirk :

I was told today that there once was a Ford Factory building tractors in Anvers (Belgium) that does no longer exists.
I also found another person who has a serial number begginning with a “A103 …” identified as the serial number on his Ford 2000 registration document.
And amazingly, this person lives in… belgium !
I guess the machines build in this factory weren’t marked the same way as the US or GB machines ?

(and further : 6015 means “engine block for tractors”, 7006 means “gearbox”, AH and AK are the versions)
Check this for detailed informations :
http://www.classicmustang.com/decoding_part_numbers.htm

November 2nd, 2008 at 8:57 am
Does anyone have any info / pictures etc of a Ford 3000 Highway spec? I have bought one but cannot find any information on them, what grills they had in, tyres they were supplied with, hitches on the rear etc etc. Can any one help?

November 2nd, 2008 at 11:57 pm
W. Starkey
I recently purchased a CD from eBay that has all the parts and numbers as well as pictures of the 2000-7000 Fords. After a trip to the Ford dealer this past weekend, I found that at least the numbers Ichecked were the actual part numbers.
Clent

January 4th, 2009 at 2:45 pm
Hi Walter,
If you just go to Google and then click on ‘Images’ at the top left hand of the screen. Then search Google Images for ‘Ford 2000′ and you will get lots of pictures to view.