I have a Massey Ferguson Ebro 157, which is a spanish built equivalent to the MF165. The hydraulic lift has just stopped working but when engaged with the control lever it makes a nasty knocking sound somewhere under the lift cover as if the pump drive gear is not engaging. Do you have any ideas as to what I should look for? I am planning to take the lift cover off and inspect the pump drive to see what I find.

You say that it knocks when the control lever is put into gear. The English MF165 has a constant running hydraulic pump, so is your tractor different? Or do you mean the PTO lever? Or do you mean when the 2 hydraulic quadrant levers are operated?

When the pto is in gear, does the pto turn when the lift is operated? If neither the pto or lift work, then your trouble is in the clutch/hydraulic pump drive area of the tractor.

Otherwise, sounds like you are going to need to lift off the top cover to find the problem. Are the hydraulic pump dowels intact? These stop the pump from rotating on its’ drive shaft – they are through the side of the gearbox casing. 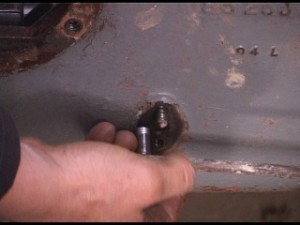 This picture is actually from a MF35, showing the removal of the dowel pin that prevents the hydraulic pump from rotating on the shaft.

Hope that gives you some initial thoughts.

February 9th, 2008 at 7:27 pm
Sorry, I wasn’t very clear. This has an identical constant running hyd pump like the english mf165. The knocking sound only occurs when I move the operating quadrant to lift gear up, but gear does not lift up?

Difficult to guess until you get inside and have a look, but it could be that the yokes are smashed on the pump. When you move the operating quadrant to up and the control valve sends oil to the lift cylinder, then the oil passing through the pump will become under pressure. If the yokes are broken then they could clatter.

Let us know what you find when you lift off the top cover.

February 18th, 2008 at 12:48 pm
Thanks Steve. I’ve lifted the top cover off now and need to pull the PTO shaft before I pull out the pump. I can see it needs a serious clean and that the screw which retains the lift ram had broken and left metal parts to damage the normally smooth ram end. I suppose these metal peices could also have found their way to the pump and damaged the pump yokes, I’ll let you know after next weekend. Peter

February 19th, 2008 at 6:50 pm
I love to read these real life repairs on this site. I’ll be watching to see what happens with this tractor (didn’t know there was such a thing as an Ebro 157). Hope you don’t find any more damage in your trany housing Peter. Is the ram shot?

February 23rd, 2008 at 6:15 am
Hi there,
I’ve now got the pto shaft out, then lifted out the pump. My problem seems very similar to the one on this websites upcoming hydraulics dvd. As I said the the ram retaining screw has broken, ram came loose and has broken off a piece of the outer casting, a piece that you can see in the dvd photos. I found this broken piece and a fair amount of small metal debris in the bottom of the sump area. I suppose it is safe to assume this debris has caused damage to the pump. Next I need to degrease the pump and inside the housing, then strip the pump down to try and find any damage. Nothing too obvious yet on the oily outside of pump. I’m looking forward to finding the extent of the damage and getting the parts ordered!
Peter

It looks like we have an almost identical problem with our tractors.

One thing to take note of are the bolts that hold the hydraulic cylinder in place. The end of the bolts are either hollow or have a weak point in them to allow them to shear off. This is a safety feature designed to help protect the rest of the system from damage (even if it hasn’t quite managed to do so in your case). Make sure that you replace the broken bolts with the same type.

If there’s no damage to the outside of the pump, then I hope the inside is OK.

February 29th, 2008 at 9:32 am
I still haven’t dismantled the pump as my family commitments don’t always allow me to go to the workshop.
Before getting this far I did try the hydraulics with the response cover off to see what I could see, which was not very much! But I did sense that the clattering noise I get was coming from further forward in the gearbox area?
I also need to overhaul the steering box which has too much play so I am now working towards removing that as well to see what is happening in the gearbox area.
Away on holiday tomorrow but I will update you as soon as I am back on the job.
Peter

I’m afriad I don’t have any info on serial numbers of the 100 series
tractors.

Sorry I cannot be of any more help.

March 25th, 2008 at 10:22 am
Hi,
I have a MF 135 and neet to get at the Hydraulics but cannot seem to get at them is there anyone who I can talk to regarding this, the problem is that I’m in France and although I can speak a little French this is too technical to speak with someone out here, I f anyone can help it will be appreciated

I tried to email you at the weekend, but the mail just kept returning to me.

There should not be anything holding either the top cover or the bottom cover (do you mean the side cover?) on. If you have removed all the bolts, then the top cover should just lift off. The only thing I can think is that someone has glued it on with some sort of gasket glue in the past. You should be able to remove it by finding a good solid edge to position a piece of wood against and then give the piece of wood a good solid tap with a hammer.

I really cannot think that there should be anything else which could be holding the cover in place.

Have the hydraulics gone wrong? Is it possible that something has jammed inside and is holding the top cover down? Although I think you said that the bottom (side?) cover was also stuck. This does suggest a glue to me.

I’ll try your email again (or the email on your holiday cottage site) to try and give you our telephone number.

March 26th, 2008 at 7:39 am
Hi both of you @ thanks .The top & bottom cover are both free .The top one lifts 2 or 3inches & only moves fore &aft it is somehow attached to the linkage underneath same with the bottom one what am I missing?. Also I can see a small piston & spring partly dislodged in the bottom.When I move the top cover the power take off selector fork moves with it.Every nut& boltI can see is out.What am Imissing?TEL0555643856 Call me &iwill phone straight back or give me a number