One of Vintage Tractor Engineer’s Australian DVD customers, forum member and much appreciated commentator on this website (it’s the tractor restoring public that make this website what it is!!) owns a grey gold FE35 and a red/grey Massey Ferguson 35. 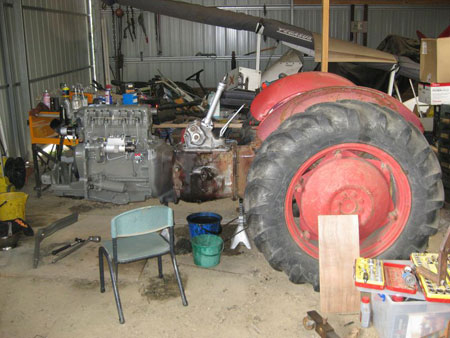 Dave has some good information for us all, and says that the gold/grey FE35 had a grey seat cushion with grey piping (NOT red as many people suggest).

Here are some of Dave’s emails, photos and thoughts about the colours and decals / badges as he has gone through the restoration process…

The grey gold FE was bought on the 2nd February 1958 from Pakenham Produce in Melbourne and my Dad picked it up from the rail yards at Bairnsdale station about 300 Kilometres from Melbourne in Victoria, he then drove it 116 kilometers to the farm at Swiftscreek, on the road, about 90 ks of that was dirt road back in those days, took him 4 hours, without registraton, the tractor remains on the farm today, it is still used for hay cutting, raking and bailing using a Massey Square bailer, which is totally red.

The seat is grey piping on grey cushion and squab.

The gold is more of a real gold colour, metalic, but is flat and faded from the years of weathering.
The colour is nowhere near the copper colour seen on other pictures i saw on the web.
Next time i head up to the farm, 2 weeks, i will get frame number and engine numbers and take some good quality photos.
I have seen other grey golds at the farm show each year at Ladner Park and they are a similar gold to ours, but restored.
The ferguson badges have red as the background, not gold or copper.

The main difference i have seen on our tractors to others is ours has two fuel filters mounted to the battery box instead of one, and has two batterys, the second one mounted beside the seat on the left hand side on the axle housing.

So far we have totally refurbed the engine using your video as a guide, spent a small fortune on the fuel system “ouch”, that injector pump refurb cost me dearly, but it was stuffed, refurbed the clutch, new bearings and plates, and dismantled and rebuilt the trans replacing one of the PTO gears, ground drive gear missing a few teeth.

We have just refurbed the steering box, and front end, replaced all the bushes, reamed them.
I bought a front end trunnion bush and pin from Agriline, but the bolt hole doesnt line up with the stepped bolt hole in the front end casting, its 1/4 inch too low, cant believe it and i’m at a loss on what to do next with that one.

Paint is confusing on the tractor, bought in December 1958, it was totally red, i have seen many mf35s here which are the same, all red, wheels and all.
Underneath the red on the engine, front end parts, trans and battery tray is gold, almost same colour as our grey gold, but not quite as yellow, more silvery gold. 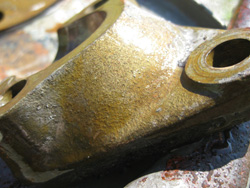 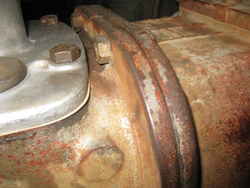 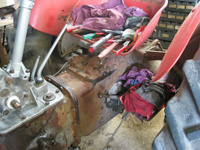 The injection pump mounting was grey under the red, as are the wheels.
the tin work is red to the metal.
The trans and axle appear to be gold under red, but the tractor has sat for nearly 20 years with the back end sticking out of the hay shed, without the bonnet on, covered in bird poop.
Dad cant remember why he put it in the shed, but i suspect it was to replace or repair the radiator as it still looks like the day it was made.
We tow started this tractor, and it started almost immediately after 20 years, couldnt believe it. Wouldnt start on a new battery, turned over but just didnt fire.

Heres some pics of it at the moment. you can see from some of the close ups on the trans housing the gold colour.
We were painting the colour scheme grey / red as you can see from the engine, all the forums say this is what it should be but now were not sure, hence the reason we were scouring the pages for colour info. 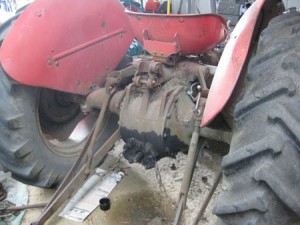 I have a guy in canada who has emailed me, and he has almost identicle tractor to ours, also built at coventry, and only 700 tractors different in the serial number.
This tractor has also got two fuel filters and a double battery setup, ours has 12v dynamo, so i’m not sur if it was 12v or 2x 6v, in series.
The front badge is missing, but the printing on the side panels says Diesal Delux, no Massy stickers or decals anywhere, but may have worn off over the years, it has the push button fuel tank cover.
My Dad says he thought the badge said Ferguson, same as the grey gold, but most of the forums suggest its the MF badge basede on build date, not sure how to confirm that either.

further to my email and photos the other day on the Red Grey MF35, i have more colour confusion, cleaning off the wheels today revealed a different colour again under the red paint…..cream. 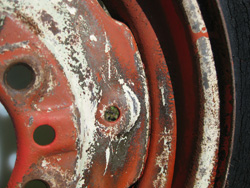 I have attached some photos again after the first wash with oven cleaner, the wheels were grey on the inside and cream on the outside.
Considering we have owned this tractor since new, it appears its a real bits and pieces tractor, gold engine and cream wheels, red tin work, all painted over red. i’ve also attached another photo with the very clear gold on the casting parts,
I have been in contact with an MF35 owner in Canada who has sent me some pics of his tractor, almost identical to ours with gold castings and red tin and wheels, pic attached.
Does any body have any ideas about cream colour in the Ferguson range ?

Dave has sent in some more info…

I love all this detective work, makes me feel like Dan Brown…..

Wording change on decals from “Ferguson” to Massey-Ferguson” authorized by Engineering Dept. on 2/9/60.

This suggests changes occured more than a year after Pauls research which fits in with a few other peoples tractors.

I’ve had some correspondence from a member of the “Ferguson Club of Victoria”, he says that it was not uncommon for a bits and pieces build up as final assembly was done at may of the distributors in import countries.
He says that tractors were shipped from the UK piggy backed, no rear wheels and no panels, the front of one tractor on the back of another, wheels tyres and panels bulk packed for latter assembly.
He also says that many were repainted here, including yellow for council orders and cream for dairy orders.
Lights, plough lights etc were fitted here depending on the customer order.

He says he will dig up a 1958 photo of tractors being off loaded 1 at a time in Sydney showing more than 50 FE35’s all piggy backed on a deck of the ship, cant wait to see that one.

And some more photos as the restoration nears completion… 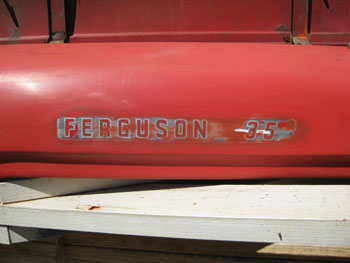 This Ferguson decal is on the bonnet, is this original? 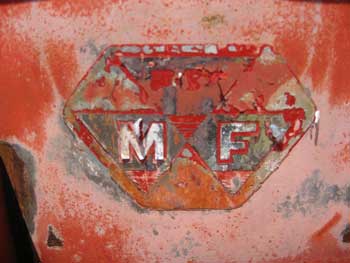 This is the current decal/badge on the back of the seat. 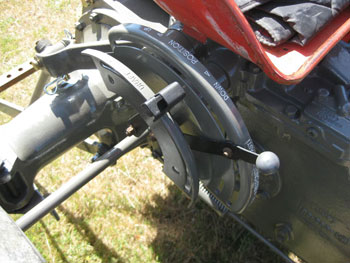 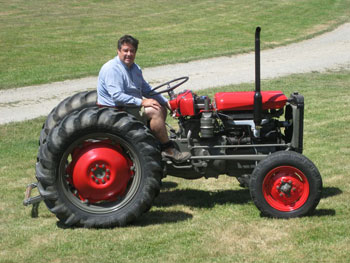 Not completed yet, but Dave couldn't resist taking her out for a run

If you want to find out how the tractor turned out in the end, you can see photos and video of the nearly completed tractor after all Dave’s hard work.